Join the global movement to save soil from extinction. 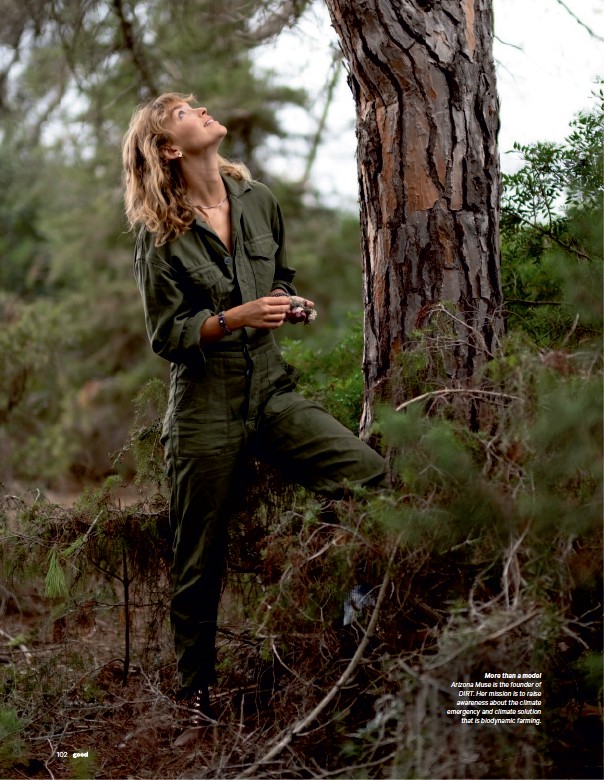 If Arizona Muse were in charge, soil would be at the top of the endangered list – and she’s not alone in her thinking. The world-famous American model, whose face has graced the cover of more than 40 Vogue magazines, is one of a growing number of high-profile personalities using their fame to urgently spread the word about the global soil crisis. From March to June 2022, Sadhguru, founder of the Isha Foundation in India, rode a motorcycle all the way from London to New Delhi, meeting global leaders and citizens along the way as part of the Conscious Planet ‘Save Soil’ movement to educate about the vital role that soil plays in the planet’s sustainable future. “Soil itself is going extinct,” says Sadhguru. “Fifty-two per cent of the world’s agricultural soils are already degraded. Eighty-seven per cent of all life depends on soil.” Soil degradation is the most pressing ecological challenge of our time, yet it’s something most of us don’t even think about. Trillions of microorganisms live in the ground beneath our feet but it’s a case of out of sight, out of mind. Not only is soil degradation a ecting the nutrient levels of our food supply, according to many experts it is also hurtling humanity towards a mass extinction event. The facts make grim reading but are necessary to comprehend if we’re to halt the predicted trajectory by the UN of having only 60 soil cycles left to sustain us. The good news is that it is not all bad news. There are things we can do to repair the damage, including on an individual level. It’s what motivated Muse to found DIRT in 2021. DIRT is a not-for-profit organisation that supports and promotes agricultural projects that are doing away with harmful chemicals and instead rejuvenating life within soil by enhancing its ability to capture and store carbon. She’s also partnered with Weleda for its Save Earth’s Skin campaign, which emphasises that, just as we care for the living breathing eco-system that is our skin, we must also do the same for the soil that sustains our life on Earth. “Healthy soil protects biodiversity, prevents flooding, and locks in carbon that would otherwise be released into the atmosphere as greenhouse gases. It’s fundamental to our existence, and yet, due to the e ects of industrial agriculture, this most precious resource is in crisis,” says Muse. The trillions of microorganisms that soil is home to counts for 25 per cent of the world’s total biodiversity. “I used to think of soil as one thing that blanketed the Earth,” says Muse. “Then I learned that in fact it’s made up of trillions of tiny microorganisms. These little guys are all eating and pooping and having sex and making babies in a lively world beneath – what we call – the surface of the Earth. They need our help. By composting we can help their populations recover, because really soil should be on the extinction list already according to me. When we spread compost over fields or gardens, we’re literally dumping microorganisms into the land and thereby repopulate them and bring life back to dirt.” Nutritional potency Evidence shows that changes in soil fertility a ects the nutrient content of fruits and vegetables – crops grown with a focus on long-term soil management have greater nutritional value. “From poor soil health comes poor plant health and when plants have lost their ability to defend themselves against pests, the pests come. Hence the application of pesticides, herbicides and fungicides to combat the pests. However, the origin of the problem so often stems from soil,” explains author Dr Libby Weaver. “Over the long term, nutrient deficiencies contribute to major illnesses.” Sadhguru calls this “hidden hunger”, where soil depletion is robbing our food of nutrients. “Everywhere else in the world, doctors are telling people to shift from meat to vegetarian diets but in India doctors are advising people to shift to meat. This is because we have not taken care of the soil. The micronutrient content in the soil has gone down so dramatically.” Soil snapshot Chemical spraying, tillage and other land practices are often to blame for microbially impoverished soils. “You hear a lot of talk about sterile soils that are damaged so much, nothing is growing in them but that’s not true,” says professor Craig Bunt, programme director, agriculture innovation at Otago University. “You can have compromised soils but to say that you could have a soil with no microbial activity in there I think is naïve because it’s incredibly complex.” The Soil Quality Data for Land 2021 report produced by the Ministry for the