in Step time back

Experience the wonders of the Karangahake Rail Tunnel Walk. 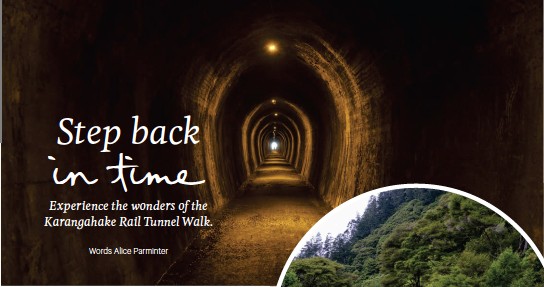 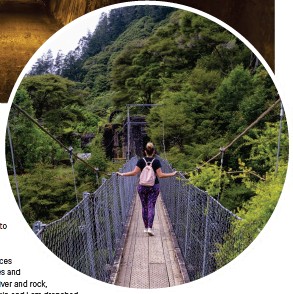 Nestled among hills at the foot of the Coromandel Peninsula, the Karangahake Gorge Rail Tunnel Loop trail winds its way through lush native forest, alongside rushing water, and a plethora of relics and ruins from New Zealand’s gold-mining era. Most start the walk from the Karangahake Reserve but I chose to start at the tunnel end where the trail darts across a bridge above the road and plunges directly through a former rail tunnel in the mountain’s side. Stepping inside, I can feel the modern world slipping away. Darkness stretches ahead of me, culminating in a tiny arch of bright sunlight over a kilometre away. I hear the mu led echoes from other explorers, bouncing around, in front and behind, confusing the senses. It’s easy to imagine I might hear the warning whistle of an oncoming train at any moment. Of course, the tunnel has long since been decommissioned. Instead, it is now part of the Hauraki Rail Trail, an impressive 197 kilometres of shared cycle and walking tracks that connect Kaiaua, Thames, Waihi and Matamata. There’s a light out in the middle of the tunnel, a longer than usual stretch of darkness, so I slow down to search for glow worms. They wink from their shadowy ceiling nooks, a little treat for those braving the tunnel without a torch. Emerging from the south end of the tunnel I’m greeted by the river, gurgling several metres below my feet. The highway is now far above the track, hugging the curves of the hill. I cross the river, and the trail forks. The loop track takes me to the right, into lush native forest. Dappled light dances through the branches and I catch glimpses of river and rock, and then the trees thin and I am drenched in sunlight once more. History is everywhere here. Strange iron forms are dotted along the tracks, remnants of machinery whose function I can only guess at. Rusted pipes as wide as a bowling ball lie along the edge of one path. Along another, the remains of a building can be seen, tree roots now reclaiming the concrete foundations beneath. Stairs up the hillside lead to the Windows Walk, where you will find a mine cart resting beside the rusted iron treads of a tramway. The Windows Walk is a marvel of its own. It snakes through a former mining tunnel; home to “Shepherd’s Lode”, the vein where most of the rich ore in the area was mined. The tunnel is pitch black but for the ‘windows’ carved from the cli face. Peep out of the windows along the way and you’ll catch a glimpse of the river, some 35 metres below. Torches are recommended. The final leg, a swing bridge over the river, is clogged with walkers so I take my time, gazing up at Mt Karangahake looming overhead while I wait for order to be restored before crossing and completing the loop. Track Notes • Distance: The Rail Tunnel Walk is an easy 3.3km return. • Access: Karangahake Gorge carpark, State Highway 2. • Take a torch.