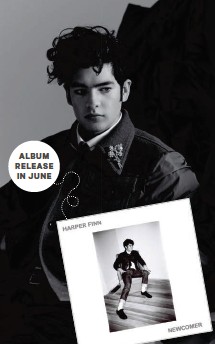 ‘Dance Away These Days’ with Harper Finn’s new EP, Newcomer, which features his hit song as well as brand new single ‘Di erent Skies’. The EP follows Finn’s win as Breakthrough Artist of the Year at the 2021 Aotearoa Music Awards and will have you up dancing in no time. The talented Kiwi singer/songwriter also writes his own melodies, plays piano and drums, does his own dance moves and to date has produced his own music, including ‘Dance Away These Days’ which had more than 3,400,000 listens on Spotify at the time of publication. “I think people were feeling frustrated in the world with the way things were and the song is an opportunity to channel that frustration into something that is like dancing and singing and makes us all feel a little bit better,” says Finn. “Someone told me that song literally helped them get through the pandemic because they said they felt really defeated and whenever they put that song on for three minutes, they would just close their eyes and dance. Sometimes music is the most powerful way for us to release a lot of energy and I think that was why a lot of people did connect with the song.” Finn has also grown out his crew cut and is embracing his natural curls. “People were sad when I cut my hair a few years ago,” he admits. “But yeah, I’m definitely embracing who I am more. Not many people realise I’m half Filipino. I’m embracing who I am more, my culture and the people that I represent. And whether that’s through the music I’m making or the way I’m looking. I’ve felt a desire to get in touch with who I am and not try to water it down or pander to what you think is what people are going like or what you think is the acceptable version of yourself, because that’s a one way ticket to anxiety and doubt and all those kind of feelings. There’s something immensely satisfying and encouraging and reassuring when you go inside yourself and find that.” Read the full interview online at goodmagazine.co.nz/harper-finn