THE PROS AND CONS OF DECANTERS

Decanters date back to Roman days and were used to separate sediment in wines made without modern technology. So, are these dramatic glass vessels still relevant today? 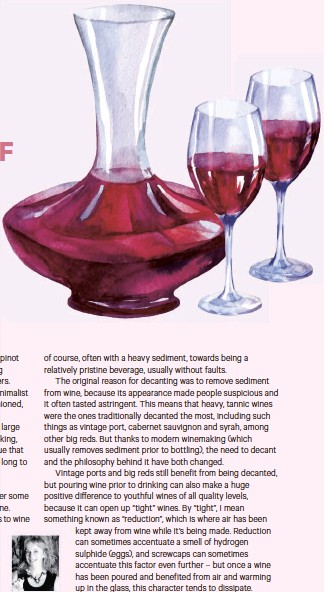 Joelle Thomson gives us the lowdown on decanters, including their history and whether decanting is worth it. When a close friend asked why his favourite pinot noirs tasted better a day or two after being opened, one word sprang to mind: decanters. Only, I was thinking not necessarily of a minimalist modern glass swirl, care of Riedel, or a fabulous old-fashioned, silver topped decanter. I have both, but the best decanter I’ve ever found is a large glass with wine poured into it an hour or two before drinking, with a saucer on top to prevent insects getting in. It’s true that wine often tastes better the next day but who’s got that long to wait for air to work its magic – and why does that day of decanting make such a di erence? If the answer leaves you ba led, this piece will uncover some of the key pros and cons of what decanting does to a wine. There are always innumerable variables when it comes to wine and every wine experience di ers, primarily because we each experience flavour di erently, due to the food and beverages we consumed while growing up. If lime juice was a childhood favourite, it’s probably a given that riesling will be a fave in the wine world – but if you love milk and butter, then creamy chardonnays might be your first pick. But back to wine and the world of decanting. The age of the wine you’re drinking, how it was made, the temperature of the room in which it’s consumed (or the warmth of a sunny day on the beach, in the bush or in the garden) all make a big di erence to the taste of wine. Not much has changed in the past 300 years where decanters are concerned, but wine has evolved massively, moving away from being cloudy as a matter of course, often with a heavy sediment, towards being a relatively pristine beverage, usually without faults. The original reason for decanting was to remove sediment from wine, because its appearance made people suspicious and it often tasted astringent. This means that heavy, tannic wines were the ones traditionally decanted the most, including such things as vintage port, cabernet sauvignon and syrah, among other big reds. But thanks to modern winemaking (which usually removes sediment prior to bottling), the need to decant and the philosophy behind it have both changed. Vintage ports and big reds still benefit from being decanted, but pouring wine prior to drinking can also make a huge positive di erence to youthful wines of all quality levels, because it can open up “tight” wines. By “tight”, I mean something known as “reduction”, which is where air has been kept away from wine while it’s being made. Reduction can sometimes accentuate a smell of hydrogen sulphide (eggs), and screwcaps can sometimes accentuate this factor even further – but once a wine has been poured and benefited from air and warming up in the glass, this character tends to dissipate. Most wine nerds agree that high-quality, full-bodied red wines and older wines all benefit from decanting because it softens tannins, removes sediment and can open up savoury flavours, revealing more depth, but decanting can also make inexpensive wines taste immeasurably better, in my humble view. It’s a controversial notion but those who are willing to experiment with pouring their wine ahead of time may just find it opens up a whole new world of flavour.